Amani Women Network is among the finalists in this year’s Diversity and Inclusion Award for Best NGO Program on Cohesion and Peace. We strive for peaceful communities to effect positive change that inspires social justice, compassion and empathy. The second edition of DIAR Awards gala dinner and awards ceremony will be held on Friday, April 12, 2019 at the Safari Park Hotel in Nairobi. The theme for year 2019 is “Making inclusion an everyday reality – celebrating your diversity and inclusion successes and inspiring action on inclusion”. 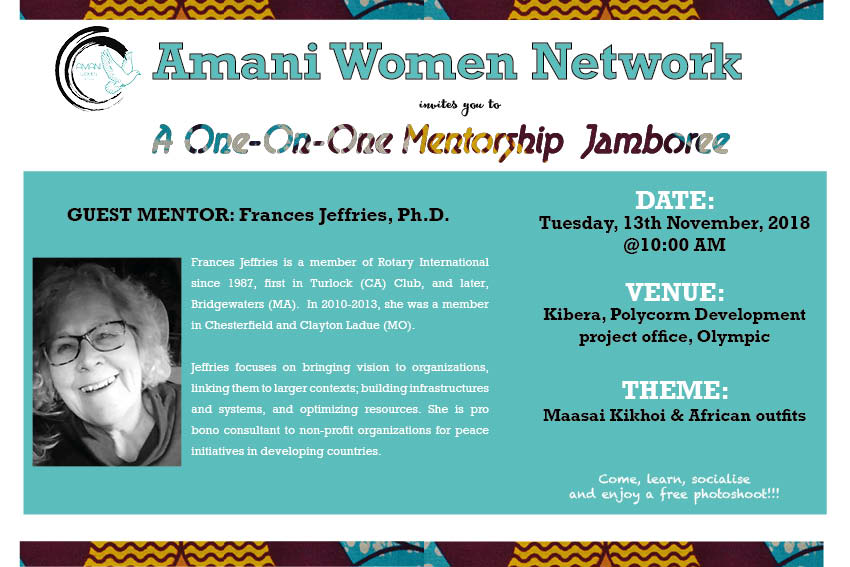 The work of women in building peace from within communities has been largely overlooked in analysis, policy, and practice in Kenya and globally, thus the introduction of women peace tables. Women Peace Tables is an international project that aims at creating a platform for women to speak about their role in conflict and peace building.

AWN through its Rotary Peace Fellows (RPF) program implemented proactive strategies to mitigate and respond to the eminent threat of possible violence before, during and after the presidential re-election that were scheduled on 17 th October 2017 by organizing a peace table in Kiambaa, Kiambu County. The peace table targeted an Anglican Church service that had over 3,000 participants.

Women shared the role they play in their homes, churches and the community as whole in promoting peaceful coexistence. Among other roles, nurturing peace came out as a critical role that women specifically play in all aspects of life. They shared how they engage with their families specifically in the evenings when everybody is at home for dinner. “Such gatherings have proved beyond dought, to be effective in terms of passing messages to our families” one woman said. RPFs urged the women to use these channels to promote peace since National peace starts in the homes.

International Women’s Day (March 8) is a global day celebrating the social, economic, cultural and political achievements of women. The day also marks a call to action for accelerating gender parity.

Female Wave of Change is a platform where women meet, online and offline, to share knowledge, build bridges and create opportunities together in this rapidly changing world. The platform is founded by Ingun Bol from the Netherlands and is represented globally in 20 countries where Kenya is a member. FWoC celebrated the growing global community on March 24th 2018, with a 24 hours event traveling the world! Consequently, our Global Ambassador, Jane Anyango of Poycom Development Project and local Wave Maker Regina Mutiru of Amani Women Network (AWN) did put together a local forum.

During the forum, female wave makers from all professions joined in as we put our strengths and abilities together to lift each other and our communities. The forum was themed “women supporting and lifting each other up” This theme was derived from the background of drawing on support from other women to harness the collective feminine energy of our peers to help us feel less alone and at the same time working together to make the world a better place.

The launch of Female Wave of Change Kenya chapter

Amani Women Network (AWN) a member of FWoC, joined in the launch of the Kenyan chapter in a well-attended ceremony.

FWoC formed early 2017 offers women an opportunity through mentorship, capacity building, social reengineering and economic empowerment to take responsibility in building their families and the community. Addressing the women drawn from diverse background, the president Ms. Ingun Bol-De-Bok, reiterated her commitment to realize a more sustainable world based on human value. She added that, a world where everyone has the same opportunity to step into a better leadership and take responsibility for the future.

AWN shares in the FWoC values which include mentorship, capacity building, social reengineering and economic empowerment. AWN aspires to change the world and believes that powerful women are the architects of change and can influence society. FWoC movement heralds a new dawn in Kenya, where women have for a long time been pushed to the periphery, from politic, corporate to media the story is same. FWoC Kenya aims at causing ripples in both the social and governance sector in days to come.

One of the co-founder of AWN and women rights expert Regina Mutiru is the Kenyan Female Wave Maker for FWoC.

Amani Women Network (AWN) together with Premier Peak Leadership Forum and Uasin Gishu Peace Forum (UGPF) held a discussion event on 25 May 2018 (African Day). The side event was held at Biblica Guest House Nairobi and discussed the status of women in South Sudan by bringing into attention of the participants the effects of war on women. Further, the participants present used the opportunity to stand in Solidarity with South Sudan women.  The discussions went a long way in understanding the situation on the ground since there were regional experts leading the discussions. This event was a side event of the first ever virtual summit on women of South Sudan themed ‘Sawa South Sudan Summit’. The participants were drawn from various sectors such as academia, Non-Governmental organizations, Government organizations and women from the informal settlements of Nairobi.

Amani Women Network was nominated in this year’s Diversity and Inclusion Award for Best NGO Program on Cohesion and Peace. We strive for peaceful communities to effect positive change that inspires social justice, compassion and empathy.

The awards process included: nominations, background checks, shortlisting, voting and finally the judge’s decision. The process was rigorous, water tight and incorporated both the voice of the general public and insights from a well-resourced, high ranking panel of jury and independent partners.

The second edition of DIAR Awards gala dinner and awards ceremony was held on Friday, April 12, 2019 at the African Paradise – Safari Park Hotel & Casino in Nairobi.

The theme for the year 2019 is “Making inclusion an everyday reality – celebrating your diversity and inclusion successes and inspiring action on inclusion”.

Amani Women Network (AWN) is a coalition of women organizations, groups and individuals from Kenya that are actively involved in advocacy and work towards peaceful coexistence in the country. AWN places special focus on collaborative approaches to conflict prevention and peace building.